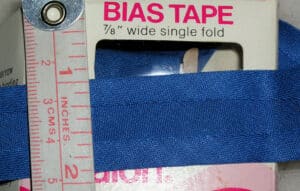 From loops for buttons to decorative elements; from sewing a seam to finishing the edges of quilting fabric  – and so much more – there are dozens of things that you can do with bias tape; hence the reason it’s often referred to as the duct tape of sewing.
Bias tape is piece of material that has been cut along the bias of a sewing fabric (hence the name). What’s the bias? – It’s the 45 degree angle that runs across the weave of a textile. Material that has been cut along the bias has more stretch, which is why it is so versatile. There are two different types of bias tape:
Since it can be used in so many ways, it’s definitely a sewing essential and something that you should always have on-hand in your sewing room. You can make your own bias tape or you can purchase pre-made bias tape at any fabric store. In this sewing help guide, we’ll share some of the uses for bias tape, which you can work into your handiwork on sewing machine or with a hand sewing needle.

Using bias tape to create a seam on an unfinished edge is referred to as a Hong Kong Finish. It really makes a huge difference in the outcome of your garments; it instantly makes something that was handmade into something that looks like it was made by a professional. To use bias tape as a seam finish, all you have to do is stitch a side of the tape to the unfinished edge so that it has a ¼ inch seam.

You can also use bias tape to give a raw edge a finished look. Simply remove the seam allowance of the garment you are applying it to and cover the edge with double-fold bias tape with a polished look. Use an edgestitch along the inner fold to attach.

Bias tape is a great way to make button loops; plus, it’s extremely easy. Begin with a double-fold bias tape, use an edgestitch on the open end, and then cut it into strips that will accommodate the size of the buttons. Easy peasy!