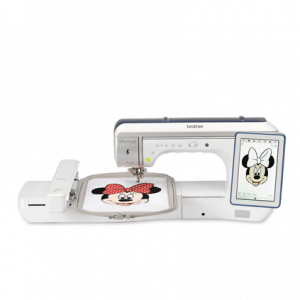 The Luminaire 2 Innov-is XP2 is one of a kind sewing machine. It really stands out as unlike the other traditional sewing machines out there, it puts a great emphasis on using advanced technologies and incredible functionalities to help give a new, transformed approach to your sewing projects.

There’s a lot to talk about it, so let us not waste any more time and get right to some of the best features and functions it offers.

Combination of All the Advanced Sewing Technologies!

We have probably reviewed tens or hundreds of sewing machines on the market, but we are yet to find something like the Luminaire 2 Innov-is XP2 when it comes to being technologically advanced.

It offers the very best – in fact, better than what we knew as the best – in terms of sewing technologies out there. There are all types of features and functions you can imagine, and that’s all while offering a surprisingly user-friendly operation. Talk about getting the best of both worlds!

The Luminaire 2 Innov-is XP2 supports wireless LAN connectivity, and allows you to stay on top of your sewing projects from anywhere in your home using your iOS or Android devices.

There’s some advanced feature or functionality for every important sewing function, including stitching, quilting, embroidery and more.

More importantly, you can make your Luminaire 2 Innov-is XP2 create any of these by just selecting them on the large, HD 10.1” LCD touchscreen display.

It basically works like a tablet, and you can do all types of things and controls using it for your projects. There’s even a particularly functionality to create your own designs on it to be used on your projects. Similarly, it also allows you to wirelessly send any images you want to be scanned and created on your fabrics.

The workspace itself is surprisingly large measuring around 65 square inches, while you get a generous 13.1” needle to suit every type of project you may ever work on.

There’s actually a lot more to the overall functionality of the Luminaire 2 Innov-is XP2, but it would probably need a whole post for it in itself.

You get notifications on your mobile device regarding important developments on your sewing projects, including changing thread, finished stitching and so on.

The highly innovative Stitchvision Technology allows you to ensure perfect stitch positioning, thanks to its smart focusing on the area you’re working on, real-time previews, ability to edit stitches and so on. There’s a pretty cool end point sewing function as well, where you have a snowball-like sewing sticker that you can just place at the point where you would want the stitching to stop, and the Luminaire 2 XP2 would do that with great accuracy.

And there’s a long list of other such features as well.

The Luminaire 2 Innov-is XP2 is arguably the most technologically advanced sewing machine ever made. It has a huge range of advanced functions that help you control different aspects of your projects with great efficiency, accuracy, convenience and ease.

It also comes with a huge range of built-in patterns and designs, including the unique Disney designs as well. You would be surprised at all the attractive and unique patterns and designs you can create without actually putting in any real effort just by using the built-in designs through the touchscreen LCD display, creating custom designs on it, as well as wirelessly scanning and creating designs out of any image you like.

In addition to the advanced scanner, the Luminaire 2 Innov-is XP2 also comes with a built-in camera-like functionality, and these two combine to make your projects a lot easier and more efficient with incredible end results.

The price certainly has to be something that would need some consideration. While you should expect to pay top dollar for probably one of the most top-notch sewing innovations ever introduced to us, it’s still something that may not be within everyone’s budget.

If you do have the budget though, let us say that it may turn out to be worth every penny you spend on it, depending on your need and range of sewing applications you work on.

The Luminaire 2 Innov-is XP2 and the XP1 may look fairly similar, but the former has been introduced as a significant upgrade for a reason.

First things first, the XP2 comes with a significantly higher number of built-in designs and patterns, and the editing and operating controls using the touchscreen LCD display are considerably better as well.

The Luminaire 2 Innov-is XP2 is also a much better option for quilters – not only compared to its previous version but compared to pretty much every other similar models out there – with its 5 different options boasting 2 color quilt sash designs.

You get more in tech features with the XP2 that are also more advanced, allowing you to take your sewing to the next level with great ease and efficiency.

As we have been repeating throughout this review, the Luminaire 2 Innov-is XP2 is definitely one of the best sewing machines ever made, especially thanks to all the advanced technologies it comes with and the highly innovative functionalities it offers.

It’s certainly one of the most expensive sewing machines too, but for the right type of sewers, it would turn out to be a worthy purchase. It would simply change the way you sew, embroider and quilt forever, and make creating amazingly unique and creative designs and projects surprisingly easy and fast.