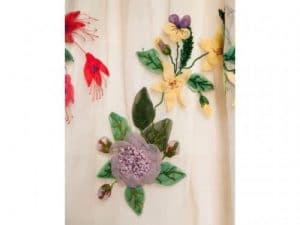 You must have been fascinated by the dresses in the 19th century; the big fancy, round frocks gowns with delicate embroidery and dainty flowers are sewn on them. That thin crepe made out of fine silk was known as Aerophane Fabric. You can imagine it as a crisp ribbon made of silk gauze and used primarily for embroidery.

Aerophane Fabric was highly popular in the mid-19th century when women loved the elegant aesthetic and romantic dresses that were fashioned out of a transparent and silky crisp fabric. They haven’t been used widely after the 1870s. There is no exact origin of it, but it gained popularity mainly in the West.

It is claimed that after the late 1930s, the name Aerophanes diminished from the textile industry, and people started manufacturing something resembling it at a smaller scale. Later the crepe Fabric replaced it, and it is vastly famous these days.

Aerophane is said to be extinct, but wouldn’t you love to know what kind of fabric had caught the eye of all designers in the 19th century? So, let’s learn why Aerophane was a popular crepe Fabric:

This fabric was mainly used for intricate embroidery and pleated twists in the dress. No matter how it was used in knitting and weaving, the fabric did not lose its charm or wrinkled appearance. Its fibers were fine and durable that resisted all changes and retained their crinkled look.

This fabric mimicked the properties of silk, and like silk, it was light-weight and easy to carry. It was luxurious and used with different fabrics without making the outfit bulky but, at the same time, fancy and aesthetic.

The material of Aerophane had a distinct lustrous glow that sparkled in the light. This was reflected in the dress and made it look ethereal. The transparent nature of Aerophane was used over soft and bright colors to add a dimensional effect in the dress.

This fabric was flexible and had elasticity, and this was very beneficial at that time. If you remember, the ball gowns were large and over the top. To gracefully tailor them and add pleats, a similar fabric was needed. The flexibility of Aerophane allowed it to be sown in different designs and trendy styles.

The yarn was twisted to display a specific stiffness and provide a crepe effect. The elastic potential of Aerophane only successfully achieved this.

Aerophane was under the spotlight for a few users, but it garnered a lot of popularity. It was not versatile but had several applications like:

Aerophanes was used to make scarves and fancy gowns, eveningwear, and other light-weight clothes that were worn occasionally.

The main application of Aerophane Fabric was to knit the details and embroidery on dresses to make them look fancy and graceful. Beautiful flowers and delicate patterns were crafted out of it to be sown on the dresses.In the 19th century, and Aerophane technique was invented. This embroidery technique was specific and so skillful that people replaced their conventional methods with it. Flowers like roses were sewn from this technique.

It wasn’t popular in the making of furnishes but was used to make expensive drapes and sofa covers. You may say it was used as homewares at the houses of the elite.

Aerophane Fabric, like all crepe fabrics, was flammable and not sturdy enough. It would rip under strenuous pressure and would quickly burn under high temperatures. It was washed delicately by hand and without any chemical detergents or soaps.

Where to buy Aerophane Fabric